I have been diagnosed as an overachiever and a workaholic.

Wanda Taylor is probably one of the busiest people you’ll ever meet.

If you ask her what she does she’ll say, “I am an author, an educator and a social justice activist. I’m also an artist and I try to incorporate all of that into everything I do.”

And she does. Wanda has moved to Toronto where she is starting her own imprint (imprints are trade names publishers use in marketing different works) with Formac Publishing. She works part time for an Ontario non-profit organization helping marginalized populations continuing the kind of work she did as Executive Director of Stepping Stone in Halifax. It’s an organization that provides support and programs for sex workers. Wanda is also a playwright, a writer of fiction and non-fiction with three books published and two more due out in 2019. And if that is not enough she does occasional consultancies in education and training.

Much of what Wanda does is about telling stories.

“I am always looking for a story in everything, and this is where King’s comes in. I am always trying to find ways to help people tell their own stories, and King’s Journalism helped me with that.” Wanda goes on, “There is power in being able to tell your own story and that story can transform someone else’s life.”

Wanda has brought the arts—story telling, theatre and poetry—to the programs provided for sex workers, mostly women who Wanda says have been marginalized. They learn how to tell their own stories, and in some cases, create new ones.

“I love telling these stories,” she says, and she talks about a particular woman who had been in the sex trade and came to Stepping Stone for help. Wanda says, “the first big thing she did with us was a theatre project.”

Wanda had written the play The Reversal of Peter Dawson and with the production assistance of Ship’s Company Theatre staged it using Stepping Stone clients and professional theatre artists.

“One of the professional theatre people was a props and set designer from Neptune Theatre and for two months he worked with this client and three others with the initial set drawings and design, and then building and painting the set and finally putting it up on the stage. When she saw it all done for the first time and up on the stage she was overcome. She said, ‘I was a part of that!’ That inspired her to say, ‘I can do so much more.’

Wanda says that woman went from that to working with people with disabilities and attending the Nova Scotia Community College.

“Here is someone who said, ‘I have no options, no skills’. But put them in a place where they have an opportunity to thrive and all these skills, they didn’t know they had, come out.”

Wanda practically glows with pride as she tells the story. For her, that is what life is all about—helping people—whether they are sex workers, new writers or youth in crisis. And she is tireless in that pursuit.

“I have been diagnosed as an overachiever and a workaholic,” she says with a big laugh. “I have a tremendous amount of energy—I don’t know where it comes from. But it has helped me move through the experiences I have had.” 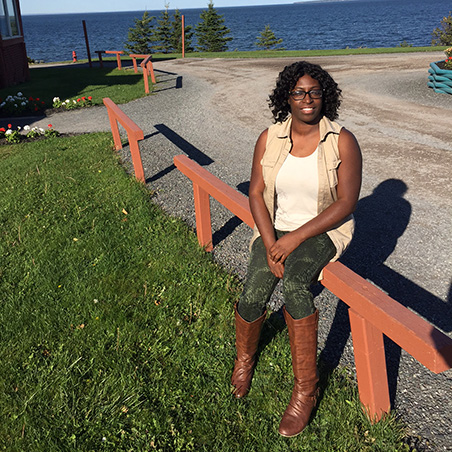