A new King’s study abroad course called Memory, Politics, Place: Berlin’s 20th Century happened last month in Berlin. There, students intensively engaged with the dynamics of memory, remembrance and commemoration of catastrophes in Germany’s twentieth century (Nazism, the Holocaust, the Cold War). Readings focused on pre- and post-World War II Berlin, studies in cultural memory and place, and critical theory involving themes such as nostalgia, historical erasure and national identity. Plus they visited the memorial sites in and around Berlin.

Cédric Blais was one of the students who studied in Berlin. He reflects on repetitions and how coming and going may look alike but be profoundly different. 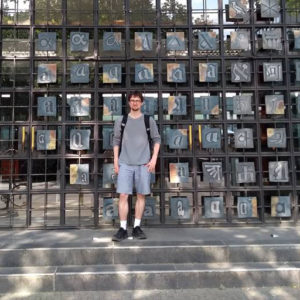 There is a strange symmetry between arrival and departure. As if playing the scene in rewind, we pack the clothes we had unpacked upon arrival, we leave the hostel where we checked in a month earlier with heavy luggage, we hug friends and wave at them just as we had on the first day.

It is a repetition with a difference, loaded with the memories we have made over our time here, and fitting for the end of a course on the memory of Berlin itself. Renovation, restoration, memorialization and destruction constantly force Berlin to revisit the sites of its own history and wrestle with the challenge of building itself upon (literal) foundations that have been irremediably struck by trauma. The past keeps resurfacing in the present: what is one to do with the Olympiastadion, built by National Socialist for the 1936 Olympics? Can a government build memorials to its own crimes without co-opting them for political purposes? 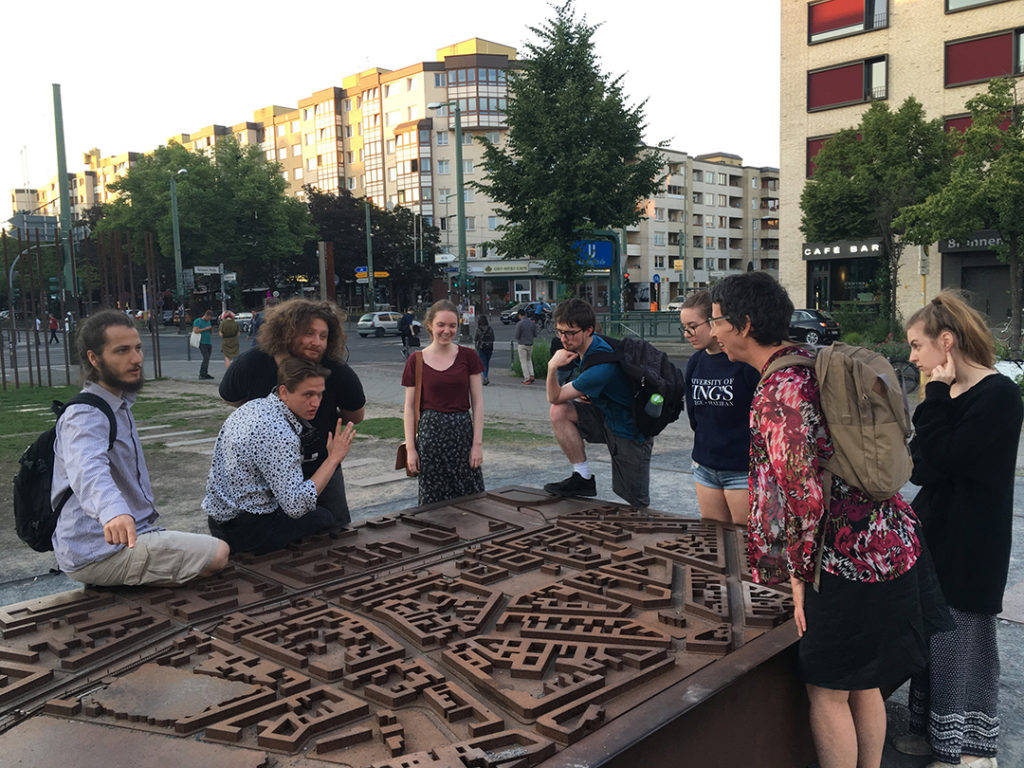 Berlin Wall Memorial Cedric (teal t-shirt; taking a knee), his classmates and Dr. Sarah Clift are at the Berlin Wall Memorial on Bernauer Str. It follows the line of the former Berlin Wall and runs above the location of escape tunnels dug by West and East Berliners to escape the German Democratic Republic. Nothing remains of the wall in this spot, save for old foundations and a long symbolic fence made of standing metal polls visible in the background. The sculpture is a map of that area of the city during the Cold War, showing the former division in three dimensions. Its material recalls the kind of metal that would have been used to build the wall itself.

And just as such repetitions invest history with contemporary relevance, so does leaving make us see with fresh eyes the neighbourhoods we had grown accustomed to over the month. It is normal to grow inattentive to the details of the place where we live—in Berlin, however, this obliviousness poses difficult challenges. Take the case of the stolpersteine (stumbling stones). Across the city lay these brass cobblestones engraved with the names of victims of the Holocaust, inserted into the sidewalk before their former homes. At the beginning of the visit, they seemed to glare at us, yet on my last evening walk I realized that even they had eventually receded into the background. How can one live with such difficult memories without becoming numb to them? And how can such memories be reconciled with our lovely times going out with classmates to eat gelato, schnitzel and bratwurst as tourists?

Now we must leave, and still all the implications of our time here have yet to sink in. On one class morning our professor, Dr. Sarah Clift, responding to the existential anxiety that had befallen the group in the face of our harrowing subject, told us it may take years for us to come to an understanding of our time here. So there is no rush. In time we will revisit the place and the memories, the stolpersteine and the schnitzel. This is a task for another day, however. At the moment of writing these lines, my train drives me ever further from Berlin.