Berlin: Where every moment is layered with the past

Berlin: Where every moment is layered with the past

A new King’s study abroad course called Memory, Politics, Place: Berlin’s 20th Century happened last month in Berlin. There, students intensively engaged with the dynamics of memory, remembrance and commemoration of catastrophes in Germany’s twentieth century (Nazism, the Holocaust, the Cold War). Readings focused on pre- and post-World War II Berlin, studies in cultural memory and place, and critical theory involving themes such as nostalgia, historical erasure and national identity. Plus they visited the memorial sites in and around Berlin.

Rachel Colquhoun was one of the students who studied in Berlin. She contributed this post as it was concluding. 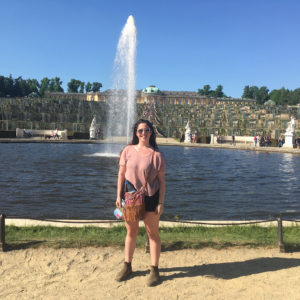 Rachel stands at the Potsdam palace know as Schloss Sanssouci in the greater Berlin area.

Berlin is the perfect city of contradictions. Besides being a world cultural capital with arts festivals, concerts and cafés a plenty, it is also the centre of the 20th century’s most horrific crimes. Every moment in this city provokes questions that have no possible answers. It is never merely a walk down the street; it is an engagement with the past, the present and the void in between that demands of each of us: what was here? What will be? What could have been?

Sitting on the porch of our hostel, trying to do the readings, we are forced to face massive western gentrification of the former East Berlin. On our way to class, we stumble upon Stolpersteine, small memorials to deported and murdered Jewish families during the Holocaust. This city is all-encompassing. There is no way to move out of the intensity. Linearity does not exist in Berlin. Every moment is layered with the past. It could not be otherwise.

One of the most difficult parts of this course has been engaging with the enormity of the questions posed. We ask big questions at King’s, we always have from the first lecture of the Foundation Year Program. But asking those questions while standing at the Memorial to the Murdered Jews of Europe, or at the Memorial to the Berlin Wall feels more immediate, more pressing and utterly urgent. It is never just an academic argument. It is of the utmost important.

Engaging those questions leads to no conclusion. We have been reading, exploring, meandering and stumbling our way around this big, beautiful city for a month, and we are nowhere close to a solution. How does a city like Berlin reckon with the ever-presentness of its past? I do not know. What I have learned, however, is that it is the search for the answer, not the conclusion, that expands our knowledge. It is staying with the question that makes the difference.

Twenty-five of us have searched and learned here, questioning both Berlin’s memory and our own. One of the thinkers we have studied, Maurice Halbwachs, argues that memory is a social experience, made up of a community actively participating in the creation of a memory. Looking back on this month, all of us have added to the King’s conception of Berlin. We had our own moments, but it was only together that we were able to create the experience we did, from the lectures, to the museums, to not getting into Berghain and everything in between. This course was so much more than a course, it was a community we built together by engaging with the impossibility of our task. I am left with full notebooks, a few tourist snowglobes, and a better version of myself than I had at the beginning. Moving forward from Berlin we will all be drawn back: whether by the thoughts, by the group, or by the memory of all that we have learned together and how far we still have to go.