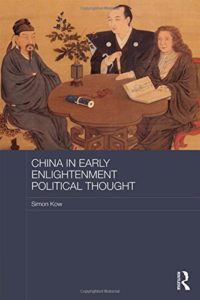 The book examines the ideas of China in the works of three major thinkers in the early European Enlightenment of the late seventeenth to eighteenth centuries: Pierre Bayle, Gottfried Wilhelm Leibniz, and the Baron de Montesquieu. This is the first book to provide in-depth comparative analyses of these seminal Enlightenment thinkers that specifically link their views on China to their political concerns.

Dr. Kow specializes in Early modern political thought and Western conceptions of East Asia. He has helped pilot “Asia and the West: Centuries of Dialogue”, a seminar cross-listed in each of the King’s honours programmes.

Dr. Kow is also a faculty member in Dalhousie’s Chinese Studies Department and an adjunct professor of Political Science. He will launch his book at Dalhousie’s China Day, hosted by the Chinese Studies department on October 25, 2nd floor Student Union Building, at 3:30PM. Dr. Kow will discuss how his work at the East-West Center at the University of Hawaii helped to inform the book.