Whether it’s ‘staging’ a performance over the phone, mapping pandemic data, or offering telemedicine in innovative ways, alumni across a spectrum of professions are proving their adaptability

The first day, “Inspector Currie” was on the line, taking down the details of a mysterious event: the disappearance of a set of chopsticks. A cast of different characters called each day after that. They included someone (clearly lying) claiming to be a representative of a US publishing house, a fellow writer (also clearly lying) and someone saying he was from an architectural appreciation society. With each call, the missing chopsticks got drawn deeper into a story filled with intrigue.

The calls were all part of a performance called The Ministry of Mundane Mysteries, by Toronto theatre Company Outside the March. With theatres shut because of the COVID-19 pandemic, the personalized show, which takes place entirely over the phone, offers a way to provide work for actors and have a little fun beyond theatre walls.

Going beyond those walls is nothing new for Outside the March, a company co-founded by King’s alumnus Mitchell Cushman, BA(Hons)’08, who met the other co-founder Simon Bloom, BA(Hons)’10 at the King’s Theatrical Society. Another King’s grad, Griffin McInnes, BA(Hons)’11, Outside the March’s associate artistic director, is one of the creators of the Ministry of Mundane Mysteries. 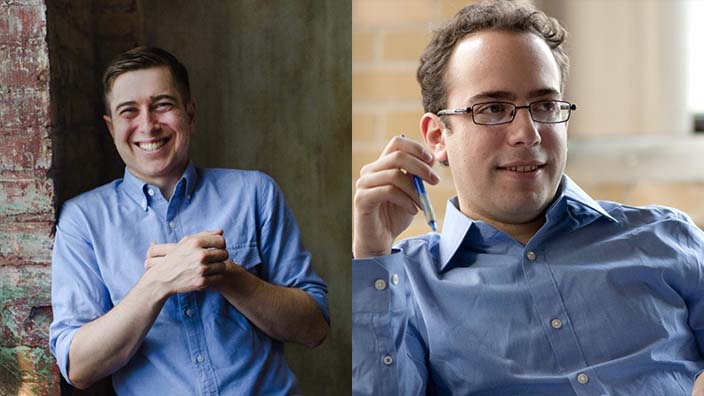 Right after physical distancing went into effect, “We all found ourselves on Zoom, like most of the world, and we were scared and apprehensive about what the future might hold, and we found some solace in being able to talk to each other and being together,” McInnes said. “And we realized that was a feeling we would be able to share through a piece of immersive art. There’s something about the human voice coming through your ears that’s a shortcut to a real intimate connection. We put together the project in two weeks, rehearsed for a week, and were ready to open to audience members.”

“We do a lot of work predicated on the idea of trying to challenge perceptions of what theatre is, and who it is for,” Cushman said. “Work that provides an active experience for audience members.” Previous OTM productions have taken place in spaces like a kindergarten classroom and an elaborately staged home, which participants experienced while wearing a headset. For the Ministry of Mundane Mysteries, participants sign up online and share a bit of information about their mystery. The company takes it from there.

The actors are improvisers, and Mitchell said the show has “an overall loose story framework that allows us to create 50 individualized experiences per week.”

McInnes said the show can be a pleasant diversion from the pandemic, but also offer an opportunity to engage with it. “We wanted something for those seeking a diversion, but we also wanted to be responsive if there was someone who really wanted to engage with questions or anxieties about the pandemic.”

Emma Wilkie, BJ’19, MJ’20, who just graduated from the King’s Master of Journalism program this spring, is engaging more directly with the pandemic. Wilkie, who decided to study journalism after a decade working in design and comedy in Montreal, landed a spot with Project Pandemic, an initiative of the Concordia-based Institute for Investigative Journalism.

It’s a collaborative project, tracking the pandemic across Canada using sources ranging from local news reports to nursing home press releases. Based in Halifax, Wilkie is the project’s only Atlantic region representative.

Every morning, Wilkie combs the news and reads her Google alerts for new outbreak information to map, and checks in with colleagues from across the country. “They can see up-to-date information about what’s happening locally with COVID. So then we’re constantly communicating and saying, ‘Hey, have you heard anything back from this outbreak?’ ” 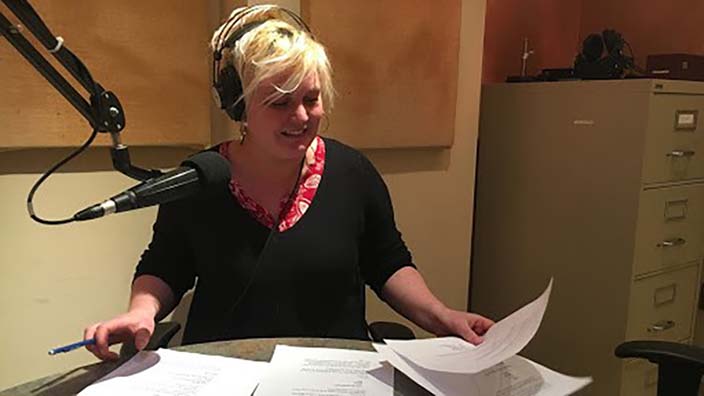 In addition to mapping stories already reported, Wilkie says the project digs deeper. “We’re making calls to local authorities and even to specific hospitals. If you zoom in on a region, you’ll see a point where you can click on it and it’ll give you more information: This was the latest information on this hospital. And here’s how many workers were infected, and how many have recovered. And down the street, you’ll see this place also had an outbreak. Isn’t that curious? There’s a ton of stories that aren’t reported on yet.”

Where are alumni working?

Wilkie points out the project isn’t mapping outbreaks to individual residences, or even individual postal codes, to protect privacy.

Nobody would plan on graduating from journalism school in the middle of a pandemic. Wilkie expected to maybe freelance and do some podcasting. Instead, she’s part of an award-winning investigative team. “I consider myself very lucky that I not only have a job right now, but I feel like I’m doing something important.”

Her training at King’s, she said, has set up her up to succeed. “The programs that I’ve taken in the last two years completely changed my set of skills. My passions for things that I had before—I am able to direct them in new, more employable ways. I can’t thank King’s enough.”

After graduating from King’s History of Science and Technology (HOST) honours program, and before earning his medical degree, Dr. Benjamin Langer,BA(Hons)’09,  studied in Israel, where he wrote his master’s thesis on Israeli and Palestinian pandemic preparedness during the 2006 H5N1 outbreak. “And now I’m essentially living in my thesis,” he says.

Langer’s not living it in Israel though, but in northern Ontario, where he practices in Sioux Lookout and in the Sachigo Lake First Nation.

Langer spends a week of everything month in Sachigo Lake, where he serves as family doctor for the entire community. Sometimes, community members are flown to Sioux Lookout for appointments, but with the pandemic some of these have been done remotely instead. Langer thinks that’s something that should continue. 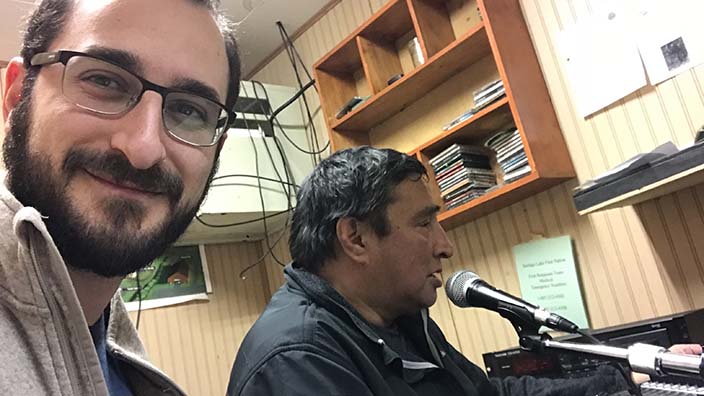 Langer (left) with an Oji-Cree interpreter. Going on the radio has been one of the primary tools of community engagement through the COVID pandemic.

“We’re trying to figure out what we can do on a regular basis,” he said. “One of the areas that I think we will continue to use telemedicine for is the obstetrical practise. Often, we would be bringing people down really frequently from their communities to have an ultrasound and a vision of the foetal heart-rate. But meanwhile, they’d have to be down for two or three days. Sometimes they wouldn’t come down, because there can be significant social barriers to being away from their home community and family for so long.”

In addition to obstetrics, Langer can also see using videoconferencing to “check in with people about their chronic illnesses” in between his Sachigo Lake visits. “Maybe we’ll invest in more home blood-pressure monitoring systems.” While there was already a growing interest in virtual care, he thinks the pandemic will lead towards “a big push” to expand it.

Despite the pandemic, Langer continues his monthly visits, and does not see distance medicine replacing them completely. “The feedback I’ve gotten is that it feels somewhat reassuring at this time that I’m still providing in-person services,” he said.

His work has required him to be creative in order to reach patients. Langer regularly goes on community radio and Facebook Live to answer questions, and he is continually considering new approaches to best serve the community. He credits his King’s education in part for that. “I value the tools and the way of thinking I that I developed through the history of science program so much,” he said. “The ways that I learned to see and analyse the world, and that process of learning, to ask certain questions and interrogate and critique systems.”