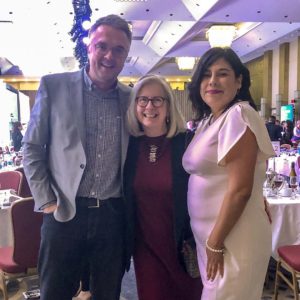 Perry, the CBC/Radio-Canada Fellow, has worked in newsrooms in Saint John, Toronto and Yellowknife, and for shows like the CBC’s World At Six, Metro Morning and The Current. But As It Happens has always been his home. There, he has covered international news and Canadian politics. In 2012, he travelled to Sarajevo to develop a special series on the 20th anniversary of the siege. He has also produced the show’s shortest interview: 7 seconds of Thom Yorke. As the senior producer, he shapes the program each night and leads the show’s digital strategy.

Troian, the McLaughlin Centre Fellow, is an independent award-winning investigative journalist who has contributed to CBC, Vice Canada, Maclean’s, Toronto Star, the Globe and Mail, The Walrus, and APTN News. With features often driven by data journalism, she covers Indigenous politics, environment, justice, and policing. She has written about the missing and murdered Indigenous women and girls, and the Indigenous water crisis in Canada. She received a Master of Journalism degree from Carleton University and an Investigative Master of Journalism degree from the University of King’s College. She is an advisor to the board of the Science Writers and Communicators of Canada and is based in Winnipeg. Troian is originally from Obishikokaang (Lac Seul First Nation) in Northern Ontario.

King’s journalism professor Kim Kierans, a Resident Visiting Scholar at Massey College for 2018-2019, was at the Canadian Journalism Foundation Gala in June where the fellowships were announced.

“It was quite a thrill to find out that two of my former students, John Perry and Martha Troian, will be Journalism Fellows at Massey College next year,” said Kierans.

“Since they left the School of Journalism at King’s, I have watched their careers flourish. The Southam Journalism Fellowship is a real gift. It’s an opportunity to explore new ideas, trends, to stretch and grow. I urged them to get to know the Junior and Senior Fellows, and to immerse themselves in the life of Massey College. It may be a cliché, but if my year at Massey as a Resident Visiting Scholar is any indication, they will be transformed by this Fellowship year.”

The Journalism Fellows will begin at Massey College on September 3, 2019.