Murder in the Cathedral, in the Chapel

Murder in the Cathedral, in the Chapel

For its second production of the fall term, the King’s Theatrical Society (KTS) is moving from the steps of library to the floor of the chapel for the T.S. Eliot classic, Murder in the Cathedral. 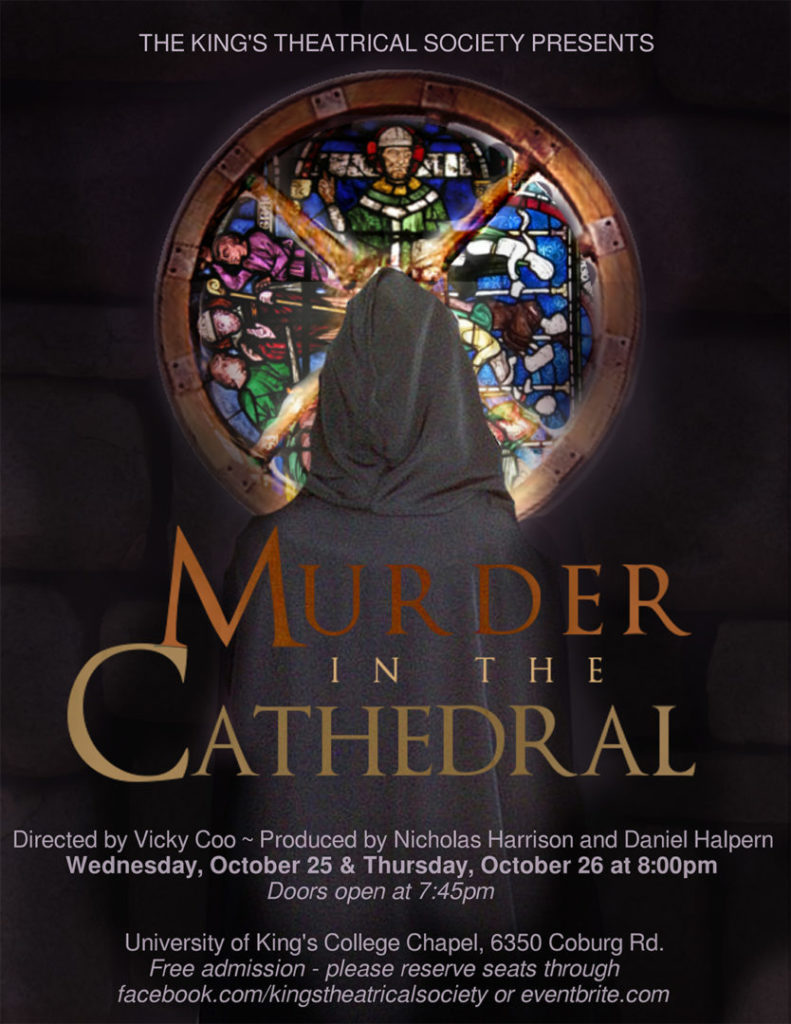 The verse drama, penned by Eliot in 1935 to protest the rising wave of fascism across Europe, features a cast of 18. Keely Ostad plays Thomas Becket, the Archbishop of Canterbury murdered for his opposition to King Henry II. The four tempters (who also play the four knights who murder Beckett) who serve as a Greek chorus are played by Frances Grace Fyfe, Susannah Rebar, Robbie Dryer and Ruth Ballard. Vicky Coo directs the production.

“I was chatting with Neil Robertson (Director, Foundation Year Program) about Antigone when he suggested Murder in the Cathedral would be ideal for Section 2 of FYP,” says KTS president, Hannah MacDougall. “Father Thorne came on board immediately and offered the chapel as a way of bringing the Foundation Year Program (FYP), KTS and chapel communities together.”

“We want to make use of actual rituals the Chapel already uses in its services, such as candle lighting, but also possibly incorporate ceremonial elements from the 12th century, such as the use of banners and symbols of the martyrs referenced in the play,” says Nick Harrison, who is co-producing the play with Daniel Halpern.

Performances of Murder in the Cathedral are planned:

Admission is free, but everyone is asked to reserve their seats through facebook.com/kingstheatricalsociety or eventbrite.com. The KTS box office opens one hour ahead of each performance; reserved tickets need to be picked up 15 minutes prior to show time.