When opening the final Foundation Year Program (FYP) lecture of the year, entitled “Imagination, Friendship and FYP,” outgoing chaplain Dr. Gary Thorne, DD ’04, said he knew when he was invited that FYP Director Dr. Neil Robertson, BA(Hons)’85, was worried he’d speak about himself—and that is exactly what he intended to do. Gary shared he was born in a Salvation Army home for unwed mothers in St. John, N.B., because although they were married, his parents were too poor to afford a hospital delivery. Growing up, he said he learned how to read before going to school despite having no books, and that the family home was so cold in winter that glasses of water placed bedside would be frozen come morning.

Gary has been affiliated with King’s since coming here as a student in 1976. He’s been University Chaplain for the past 13 years. In his career, he’s also been a scholar, military chaplain bestowed with its highest honours, and a social justice activist. He was pastor at St. George’s Church before coming to King’s, and instrumental in rebuilding it after a terrible fire. He also started St. George’s YouthNet, which provides free programs to underprivileged children and youth living in Halifax’s North End, and was instrumental in creating Halifax Humanities, which teaches reflection and critical thinking through the humanities to socially disadvantaged adults.

Alumni Hall was filled to capacity to hear Gary’s April 10 lecture, which heavily referenced philosophers Simone Weil, Charles Williams and Hannah Arendt. But his own story may have generated the most interest, including his descriptions of becoming a Marxist-Leninist in the 1970s and his ambitious road trips: “Despite my and other members of the proletariat crisscrossing the province, Marxist-Leninist-Maoist ideology never really took hold in the backwaters (of New Brunswick).”

Gary said through FYP lectures, he discovered a philosophy of history that, “revealed my own thinking to myself.” He quoted the Rev. Dr. Robert Darwin Crouse’s, BA ’51, MTH ’57, speech from Encaenia 2007, saying, “Recollection is the fundamental task of education.”

Discover your own thinking

He told the students the value of FYP is that it allows everyone to discover their own thinking. You’re introduced to a history of ideas and those ideas have become your own, he told them, but FYP is more than that. “FYP was founded in 1972 so we could come to an understanding of our contemporary world. To discover what was both hidden to you but active and effectual in you. The past is always here. Our choice is to possess it consciously in recollection.” At a packed farewell reception in the President’s Lodge on April 9, friends, family and colleagues gathered to wish Father Dr. Gary Thorne well as he prepares to leave King’s after 13 years as University Chaplain.

Registrar Julie Green noted Gary’s resemblance to Dumbledore, and how he kept the King’s community “looking for the owls in our midst.”

Dr. Daniel Brandes, speaking on behalf of faculty, called Gary a marvellous friend to whom he’s deeply and intensely grateful. He noted that Gary invited him to serve as the first Jewish theologian in the King’s Chapel, and said Gary was forever inspiring people at King’s with his worldliness and wilderness retreats. “We love you and will miss you,” Daniel said.

Music Director Paul Halley called Gary “inscrutable” and read Gary’s own words from emails the two men exchanged over the years. “Every word from his mouth must be given due attention,” quipped Paul. When Paul asked Gary what might be required of the new chaplain, Gary replied, “A chaplain who can sing and a holy fool.”

Will Barton, BA(Hons)’13, said he most admired that Gary got to know each student personally. He said knowing Gary was to “feel known and loved.” Will also acknowledged Gary’s fondness for taking people off campus and into the woods, and gifted him, on behalf of the chapel community, with a made-in-Nova Scotia hand-carved canoe paddle and hand-woven basket.

King’s President and Vice-Chancellor William Lahey spoke about the importance of the chapel to campus life and particularly the Foundation Year Program. “I’m blessed I’ve had the chance to be your colleague and even more so, a member of your church,” he told Gary.

Gary spoke last, quoting both Aristotle and A.A. Milne’s Winnie the Pooh about the nature of friendship and how friends are supposed to love each other, but also how it’s through our friends that we come to know more love for ourselves. “The past 13 years of love and friendship have been unimaginable,” Gary said. “The practice of love, I thank God for all of that. God has blessed and provided for me.”

Gary recalled reading Friedrich Nietzsche, Martin Heidegger, Georg Hegel and particularly Ludwig Feuerbach, who he said helped him realize, “My truth is not mine at all. My truth is not private. FYP asked me to reconsider what I’d previously accepted in a non-reflective way.” He said these texts help contextualize modern-day atrocities such as the ethnic cleansing that’s driven the Rohingya people out of Myanmar, and a program in Iceland to abort imperfect fetuses so there would be no people with intellectual disabilities born there.

“We must take responsibility for this fragile world,” Gary said. “The capacity to give one’s attention to a sufferer is a very rare and difficult thing; it is almost a miracle; it is a miracle,” he said, quoting Simone Weil.

We can quite literally take over the cares and anxieties of another, Gary went on to say, referencing Charles Williams who said we can carry burdens the same way we can carry an actual, physical parcel for another. “It gives us a way to discover our daily humanity. To live with and for one another. In the chapel on this campus this is the life we have attempted.”

Chapel life at King’s, Gary said, has never excluded the secular. It includes concerts, open mic events, retreats and lively discussions. He said the lessons learned in Alumni Hall relate to chapel life at King’s in the same way philosophy relates to poetry: “The philosopher must become a poet or at least an interpreter of poems.”

“Simply reading is not enough. We must learn how to love,” Gary said, noting these are habits to be practiced and cultivated every day, particularly in small communities where there is accountability.

“Empathy. Friendship. Every human soul is available to attention. To be embraced. To bear their burden,” he said, noting this cannot be limited to those of your own race, class or ethnic background. “There are certain iterations of identity politics that are ideological views,” he cautioned.

As his lecture drew to a close, Gary referenced its title and acknowledged that he hadn’t spoken directly about friendship. “I don’t need to. I look at you and see friendship of all forms and types. I want you to know how beautiful you are to me.

“In this College, you have been introduced to the unity of knowing and loving, and that is what this world needs,” he concluded.

Gary leaves the College in June. 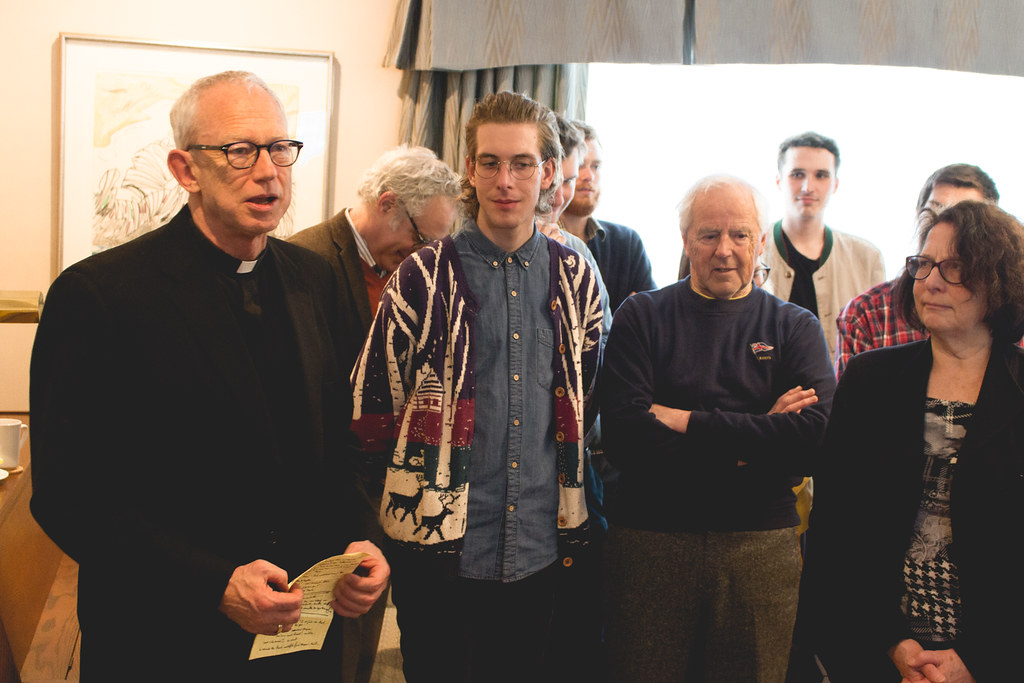