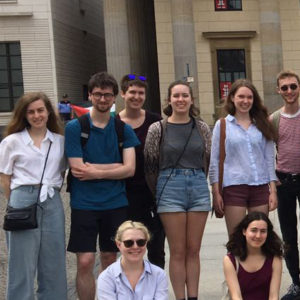 Contemporary Studies and History student Jen Hall is third from the left, back row.

A new King’s study abroad course called Memory, Politics, Place: Berlin’s 20th Century is currently underway in Berlin. There, students are intensively engaging with the dynamics of memory, remembrance and commemoration of catastrophes in Germany’s twentieth century (Nazism, the Holocaust, the Cold War). Readings focus on pre- and post-World War II Berlin, studies in cultural memory and place, and critical theory involving themes such as nostalgia, historical erasure and national identity. Plus they visit the memorial sites in and around Berlin.

Jen Hall is one of the students currently studying in Berlin. She contributed this post.

Being in Berlin has been a sad, uplifting, unsettling, joyful, heartrending experience. More than anywhere else I’ve lived, this place accommodates jarring and sometimes incomprehensible juxtapositions: picnics in the shadow of remnants of the Berlin Wall, memorials to victims of the Holocaust in the midst of the blooming Tiergarten, the ever-present graffiti creeping slowly but surely onto the windows of high-class stores. One of the questions I had in the first weeks of our class was simply – how does one live in this place, where the past and the present sit so closely side by side? Berlin differs from other cities I’ve visited in the near constant intrusion of the past. Unlike other cities, where monuments have clear boundaries, such as fences or carefully tended hedges, here it’s hard to escape the sense that everything around you could – maybe should? – be a monument. Four weeks into this course, if there isn’t a memorial plaque for something on a building, I now assume that I just haven’t looked hard enough for it.

The questions we have been investigating, of the politics and difficulties surrounding memorialization of Germany’s complex and shameful history, take their force from this subtle awareness of the past pressing in on all sides. The past is present here, and while for Canadians it may be easy enough to avoid knowledge of our own particular state’s history, in Germany the process of figuring out how to live with the past is worked out constantly, unavoidably, in all areas of life. In many ways, this course is as much about contemporary Germany as it is about past Germany. What we read is as much a preparation for the political disagreements here and now, as it is a preparation for experiencing the many spaces of remembrance for which Berlin is famous.

I was, and still am, surprised to find myself in the middle of this continually changing, unfinished, always evolving space that we have set out to study. I always thought of myself as one who studies things that are, if not complete, at least not shifting around very much; but if there’s one thing I’ve learned from this course, it’s that the work of memory, like politics, is never finished. A monument can never have the last word. Berlin, a city that has a way of constantly throwing the new and unexpected at you, is the perfect place to try to come to terms with this idea. I am inspired by Berlin’s energy and commitment to the never-ending dialogue that shapes this city’s challenging relation to the past.

Sitting in the Tiergarten last Sunday, surrounded by picnickers, sunbathers, open air birthday parties, and the sound of birds, I found myself carried along by the sheer energy of place I have come to love in the last few weeks. Although I am crawling exhaustedly towards the end of this course, the incredibly well-dressed cyclists rolling past our hostel in the morning, in colourful dresses and sometimes high heels, inspire me to keep moving forward. I have collected three notebooks’ worth of scribbles, a ridiculous number of books (and plans for many more!), and several hundred photographs. What will I do with this piece of my life, once it is past? Perhaps the biggest lessons of this course will come from looking back.