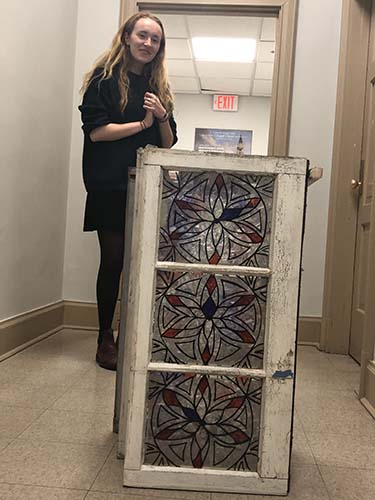 Third-year student Sarah Sharp designed a series of connected windows that depicted different conceptions of time, which were highlighted by quotes from Heidegger and the Book of Genesis.

Third-year Contemporary Studies (CSP) and Classics student Sarah Sharp created a beautiful and thought-provoking ‘block window’ as part of an end-of-term project for her History of Science and Technology (HOST) class The Nature of Time II.

It’s comprised of three connected windows.She made designs on each using oil-based Sharpies and glass paint. The first window, following the Judaeo-Christian tradition, represents the ‘arrow of time’ or time as chronology. This vision of time is destabilized in the second ‘quantum window’ which illustrates the wave-particle duality in quantum mechanics. The third window contains the symbols of the circular rose which posits time as both cyclical and eternal. Viewed from the side, the three windows form a timeline, or time as duration, whereas when they are seen altogether, as they are in this picture, they depict a ‘block’ vision of time, or all of time perceived simultaneously.

This tripartite model of time, reflective of the way in which the past, present, and future all have a bearing on one another, was originally inspired by Einstein’s theory of relativity—the window presents a different vision of time to its viewer based on their relative position to the piece while light remains a constant throughout. 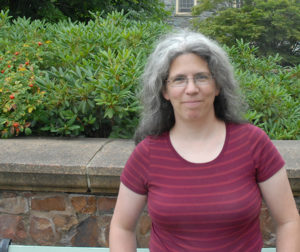 Writing on the window frame includes a quote from the Bible, Genesis 1:3, “And God said, ‘Let there be light.’ and there was light” and a quote from Heidegger, “The eye can unveil only in the light.”

Sharp hoped to capture the interdisciplinary nature of time in her project which she describes as “Visual art meets physics.” She sourced the windows off Facebook Marketplace, and wrote a paper to accompany and further explain her concept to her peers and professor, Dr. Mélanie Frappier.

King’s History of Science and Technology (HOST) program challenges students to ‘rethink our relationship with everything’—including time itself.