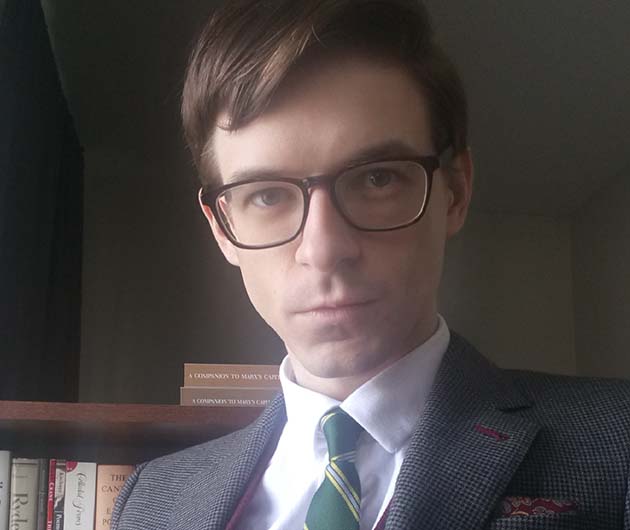 Dr. Tim Clarke is an assistant professor in the Foundation Year Program. He received a BA in English and Historical Studies at Memorial University of Newfoundland in 2011, an MA in English at Queen’s University in 2012, and a PhD in English at the University of Ottawa in 2018, where his doctoral research explored the tangled legacies of Spinoza’s philosophy among American literary writers of the 19th and 20th centuries. His research focuses on encounters between literature and philosophy, especially literary modernisms and philosophical reflections on vitalism, death, and affect.

Dr. Clarke’s current project, tentatively titled Morbid Vitalism: Life and Decadence in Modernist Literature, conceives of literary modernism as the site of a counter-intuitive synthesis of alternately vitalist and death-oriented thought that he traces in part to modernism’s inheritance and development of the decadent tradition. Dr. Clarke has recently published on Spinozan affect theory, failure, and the fear of death in Djuna Barnes’s novel Nightwood. He is also the co-translator of numerous texts by the Brazilian geographer Milton Santos.

Dr. Clarke is presently researching the logic of decadence in nineteenth-century American literature and the entanglements of decadence and vitalist thought in literary modernism.

Spinozisms: From Early Modernity to the Contemporary World