In the run-up to the ACAA Badminton Championships being held at King’s this weekend, meet one of the team’s national silver medalists, Bryce Mason, who may be one of the busiest people you’ll meet at King’s. Through it all he’s found learning, triumph and community

When Bryce Mason was choosing a university, King’s checked every box.

“It was a nice close-knit community. It was a smaller school, so I was able to connect with the staff and more students,” the second-year chemistry student said. “Academically it allowed me to pick what I wanted to do and be able to play for a varsity sport, which I’ve always wanted to do since I was a little kid.”

Not only did Mason fulfill his childhood dream and earn a spot on the King’s badminton team, but he has been a part of a historic run by the Blue Devils.

My biggest memory is just every day being with my teammates.

The team won its second straight ACAA Badminton championship in 2019, before claiming their first-ever national medal at the 2019 CCAA Badminton National Championships: a silver for Mason and his doubles teammate Benn Van Ryn.

“I couldn’t have planned it any better,” Mason said. He appreciates the triumph but relishes the camaraderie. For him, the most special moments at King’s are what become the ordinary.

“My biggest memory is just every day being with my teammates,” he said. “Like there’s not one single day that I could pick out, or an event that happened…but just every day.”

Because he lives off campus and has a part-time job, athletics helps Mason find community at King’s. During his first year on the badminton team, veteran players would introduce him to staff and other students to help him get to know people. The Cole Harbour resident drove in early every day and stayed on campus between classes and practices to study and train. He actually treated his days at King’s as a job itself.

“Some students can go back to their dorm room or they can go to a house nearby if they’re living with friends,” he said. Ultimately though, more time on campus only strengthens his connection to King’s. “It allows me to get a lot closer to the school.”

Between his studies, training and work, Mason barely has time to eat and sleep. “For me it’s time management,” he said. He has an entire routine.

“In the morning, I get my academics done early, so that way my schoolwork is done ahead of time,” Mason said. “It leaves me the time left over throughout the day to train.” 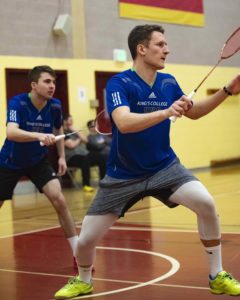 Mason (left) with 2019 doubles teammate Benn Van Ryn, with whom he won a national silver medal.

Even though he’s always on the go, Mason is likely wearing some piece of his King’s Blue Devils athletics gear wherever he is. It’s not something he takes for granted. Whether he is on the court or off campus in the community, Mason feels he is still representing his school and its values. That means being honest and respectful to everyone else.

“That way, they know when they watch me play, they’re like, ‘Man, he’s very honest,’ or, ‘He’s a very nice guy, coming from a very reputable school and gives the school a very good reputation.’ ”