The King’s badminton team has won the Atlantic Colleges Athletic Association (ACAA) Championships for the second year in a row. It came down to a the final mixed doubles match of the day between UKC and MTA to decide the fate of the schools, and the team of Sam White and Sylvie Julien sealed the deal. In a full team effort, Sam Lawther won women’s singles and Bryce Mason won men’s singles. Their points, combined with points received from the men’s doubles team (Benn Van Ryn and Riel Tetreault, who finished second) and the women’s doubles team (Julia Swail and Molly Lash-Burrows), edged out MTA by one team point.

This was the second year in a row that King’s won the banner, after winning last year for the first time in our school’s history. 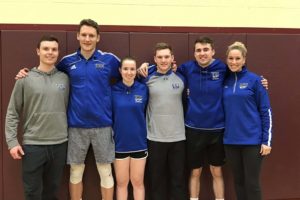 The CCAA Qualifiers took place on Sunday. These matches determined who will attend the CCAA Nationals as part of the ACAA Team. King’s is extremely proud that Benn Van Ryn and Bryce Mason won the men’s doubles category and the Sam Lawther and Sam White won mixed doubles. These two doubles teams also won last year and are looking forward to having a second chance at winning a medal.

At the awards banquet, Sam Lawther and Sam White were both crowned ACAA Badminton MVPs. This also means that both student-athletes will be named to the CCAA All-Canadian Team. The “Sams” are in their final year of competition and both have qualified for the CCAA Nationals in every year they have played.

King’s is unbelievably proud of the “baddies” (badminton team) and their accomplishments!