The King’s co-ed badminton team performed well at a recent tournament (Nov. 24/25), winning in seven out of 10 matches to capture the tournament at Holland College in Prince Edward Island. The defending Atlantic Collegiate Athletic Association (ACAA) champion Blue Devils edged out Mount Alison University with 79 team points to the Mounties’ 72. 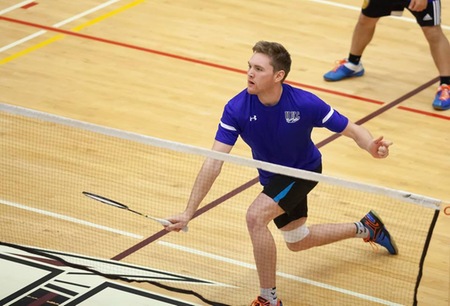 “It was big. Now I think what they’ve done is shown that all the predictions and what people thought was going to happen has actually happened,” says Athletics Director Neil Hooper.

‘The Sams,’ third-year student Sam White and second-year Sam Lawther, were standouts for King’s, winning each of their mixed doubles matches in straight sets. Lawther also won the Women’s Singles A event while White won Men’s Singles B. White and Shinji Yamamoto, who are also teammates on the soccer team, captured the Men’s Doubles B event.

The win was important for a King’s team looking to bounce back from a rocky first tournament. With the season-opening tournament coinciding with Canada Games trials, team Nova Scotia hopefuls White and Mason and team Prince Edward Island team member Lawther were all unavailable to represent King’s. By winning the second tournament, Hooper thinks the team will have positive momentum heading into 2019.

Last season, King’s captured the ACAA title for the first time in school history, and with many of those team members returning they’re well-positioned to win again. “We’re actually even stronger this year,” says Hooper.

Lawther, White and the doubles pairing of Mason and Van Ryn represented King’s at nationals last year in Edmonton.  As a team, King’s is currently ranked third in the nation. This year’s national championship is hosted locally—in Truro—meaning gold and silver medalists in ACAA play will earn a berth to nationals.

Last year, Athletic Director Neil Hooper called it “the best badminton season in the history of King’s.” As for this year? “I think we have a chance to make it even better.”